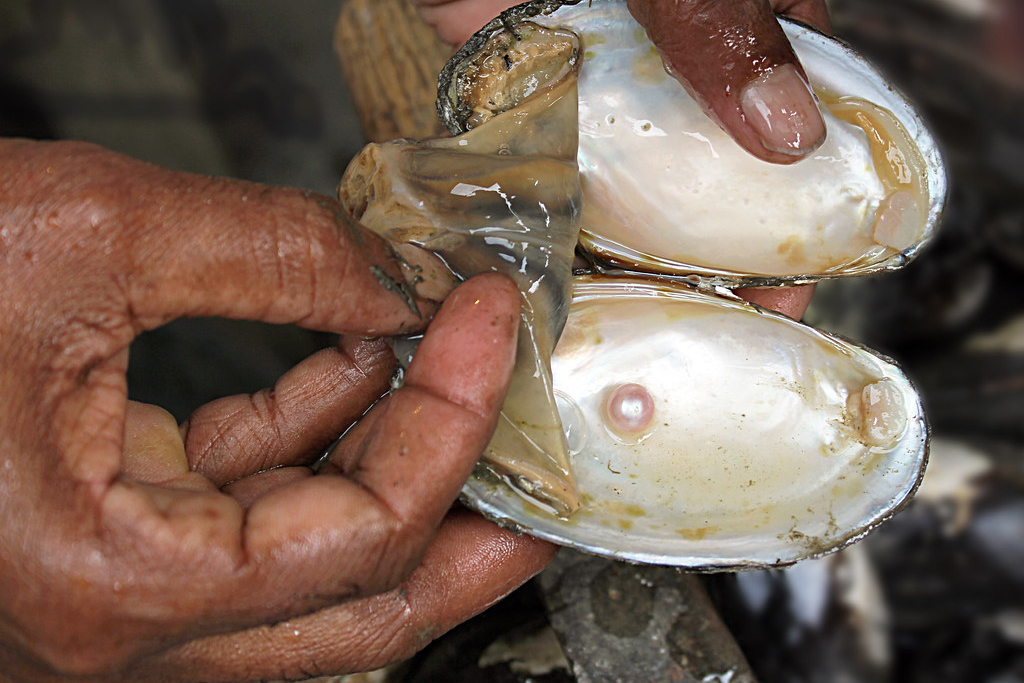 Pearls are formed by pearl oysters. They are called Natural when a parasite or foreign object randomly deposits inside the mantle folds of the mollusk, and Cultured when the foreign object is implanted by humans. The planting of a foreign object inside the mollusk triggers a defence mechanism that causes the mollusk to secrete a substance called nacre or mother of pearl with which it coats the foreign object in thousands of layers. The composition of the substance produced by the mollusk is approx. 93% calcium carbonate, 3-4% conchiolin and the remaining part humidity (important: when wearing pearls, avoid their contact with acidic substances such as perfume, colouring agents or make-up, and wear them often to maintain their humidity).

Natural pearls are no longer available on the market.

Akoya pearls, South Sea pearls, Black Tahitian pearls and Freshwater pearls.
Akoya pearls: Akoya oysters (Pinctada fucata martensii) produce a saltwater cultured pearl with a diameter ranging from approx. 2 mm to a maximum of about 10 mm. This mollusk is farmed mostly in Japan, China and Vietnam. They are famous for their excellent luster. The farming technique, also known as nucleation, was discovered in Japan at the end of the 19th century by Kokichi Mikimoto. It consists in planting a mother of pearl bead in the gonad, the oyster’s sexual organ. In self-defence, the mollusk secretes thousands of layers of nacre to isolate the foreign body, forming a coating that increases in thickness with the passing of time. The oysters are monitored for various years. Thanks to this method, starting in the 1920’s the cost of pearls became more accessible to everyone, unlike when only natural pearls were harvested and sold to the rich. The pearls obtained are usually round and white, ivory, cream or silver with pink hues. The charm of Akoyo pearls is the formation on the surface of a rainbow of light and colour that makes them the most appreciated among jewelers. The Japanese, who dominated the pearl farming industry up to a few years ago, have been overtaken by the Chinese who have created fierce competition and a drop in prices.

South Sea pearls: these pearls are cultivated in the Pinctada maxima oyster that lives in the Pacific and Indian oceans.They are farmed mainly in the belt area north of Australia and for this reason are also known as Australian pearls. Other manufacturing countries are Indonesia, the Philippines, Myanmar and Thailand. The pearls produced by this oyster are among the largest in the world, their diameter ranging from 10 to 20 mm. As they live in considerably warmer waters compared to their Akoya cousins, they secrete nacre more quickly and therefore the coating is thicker, varying from 2 to 6 mm.

There are two varieties of P. maxima: the silver-lipped oyster that produces pearls with colour ranging from white to silver grey with pink hues and from blue to green, and the gold-lipped oyster that produces pearls of colour ranging from yellow to orange. The pearl culture technique of this variety is the same as that of its smaller cousin, with the difference that, after extracting the pearl, P. maxima can be renucleated while F. martensii (Akoya) dies. Maxima can be 90% harvested in the wild out at sea and then nucleated. With Akoya, on the other hand, the entire farming process occurs in captivity. Only a small percentage of Australian pearls is perfectly spherical. For this reason, a strand with near-perfect spherically shaped pearls with thick nacre coating, homogeneous colour and clean surface with high lustre is a very rare thing and of very high value.
Black Tahitian pearls: in the early 20th century, the seas of the Polynesian archipelago abounded in the black-lip oyster known as
Pinctada margaritifera,
Cumingi variety. The various hues of grey of the mother of pearl contained inside the shell made it highly appreciated and used for creating jewelry. In the 1960’s, Jean Marie Domard in Tahiti starting experimenting the Japanese nucleation technique on the black-lipped oysters and obtained the first ‘black pearls’- 60% of the mollusks had accepted the bead and had originated very high quality pearls. This was the beginning of ‘Tahiti’ pearl farming. The large size of the oyster allows to obtain large pearls, from 8 mm to 20 mm in diameter. Today there is only the pearl trading centre in Tahiti, while farming is performed further east in the Gambier islands in French Polynesia and in the Micronesian islands. The pearls’ colour is not truly black, and they have reflections that range from silver grey to copper grey, from green to bronze, emerald green, anthracite and, more rarely, eggplant, turquoise, blue and pink. The most sought-after and valuable colour is Peacock that features iridescent multicoloured reflections.
Freshwater or River pearls: Freshwater pearls have been harvested in China, the world’s major producer, since the 13th century. The mollusk used for farming this variety is the Cristaria plicata that accepts various implants per valve, producing many pearls simultaneously in 2 to 6 years. The resulting pearls consist only of mother of pearl. This means that, without a solid core, the pearls are rice-shaped and of low quality. In the mid 1990’s, the Chinese changed the oyster variety to Hyriopsis cumingii as well as their farming technique to improve pearl quality and bring them up to saltwater pearl standard. At the age of about 8 months, the mollusks are stimulated to secrete the mother of pearl via microincisions of the mantle in which are implanted tiny pieces of mantle from a donator mollusk. The result are round pearls with excellent quality mother of pearl that, although rarely, can reach the size of 15 mm, just like the Australian pearls but less expensive. There is a large spectrum of freshwater pearl shapes and natural colours. In some cases, their quality can equal that of Akoya pearls, and only an expert can distinguish between them. In Japan, freshwater pearls had been farmed since 1975 in Biwa lake and up to 2006 in lake Kasumiga, but due to pollution farming has stopped in both locations.
EUR / USD exchange rates
Precious Metals Quotation EUR / Gram
×